Gouache and gold leaf on vellum. The exemplar for this scroll is one I've had on my "todo" list for a long time -- BL MS Lansdowne 851 f. 66.

Omnibus has literas visuris vel audituris Ericus et Jaquelyna regnantes Drachenwaldenses salutem in sanitate. With these our present letters signed and signified by our own hands we the said rulers name, enroll, and confirm our loyal subject Lord Benjamin von Papenburg -- who has served us long and well -- as a member of the Orden des Lindquistringes. Fit manibus nostris xiv dies martii a.s. liv.

Translation of the Latin: To everyone these letters seeing or hearing, Æiríkr and Jacquelyna, rulers of Drachenwald, greetings in good health...done by our hands on the 14th day of March, a.s. fifty-four.

Many thanks to the new Artfer Hours initiative in Durham, which is where much of this got painted and gilded. The bird-themed week is why I added the little green bird. Given the recipient's name, it was so obvious what I needed to do -- find a medieval MS with yarrow in it and make a page that looked like it could've come from a medicinal. I found a variety of MSs, but liked the best this De Materia Medica image of yarrow from a 10th C Turkish MS.

The text on the left reads:

Achilleos or yarrow, otherwise commonly called gearwe [the Anglo-Saxon name of the plant] is an herbaceous flower for the soothing of spirits.

The right-hand side was intended to read as if it were a translation or gloss of the Latin, but without being a translation:

Yarrowe, otherwise commonly known as John, soothes the spirits of all and is now named a lord of our court.

I'm exceptionally pleased with the calligraphy which I did freehand without even drawing any lines. I feel like I've finally figured out how to write rather than the draw. I didn't intend to do any scribing at Crown Tourney, so I didn't bring my stuff with me. Which just means that I calligraphed this blank (not yet finished, as depicted here) by Greta of Thamesreach with unfamiliar pen, nib, ink, and without a ruler. I'm pretty pleased with my ability to draw evenly spaced lines without a ruler, and while the calligraphy is by no means my best, and I came away with a hand covered in ink, the result is still not too bad. And I can't wait to see the thing when it's wholly done.

Due commendations and salutations to all seeing, hearing, or reading these present letters from Vitus and Isabel, king and queen of Drachenwald. Let all bear witness and testimony to our royal will that on the xix day of October Maud de Elsing is made a Lindquistringes.

Sun and Chalice for Agatha of Norwich I've had this blank, done by Saraswati man-Ikkam, for absolutely ages. It was a pleasure to use it for such a wonderful lady as Agatha.

Go forth and spread the words of Constanza and Duncan rulers of Insulae Draconis who by the power invested in us by the authority of law and custom do recognize our dear subject lady Agatha of Norwich as a member of the Order of the Sun and Chalice on the xix day of October, anno societatis liv. hac testamur (here we witness).

This initial is taken from Codex Michaelburanus perg. 1. f. 195r.

I screwed up a bit on the spacing of the calligraphy -- did the top line on the gap between the lines rather than on the text line, and then started the second line of main calligraphy too low. Ah well. Overall, I think it's okay. The text reads (unabbreviated):

His presentibus audite (Pay attention to these presents!) The kingdom of Drachenwald is made strong by those who protect our borders and those who are renowned are numbered amongst the Order of the Silver Guard. Such a warrior is Robert du Prey who we, Vitus and Isabel, enroll today as a member of the said order. Dated xxxviii sept. a.s. liv, and witnessed below.

I love doing these zoomorphic gold dragon initials with the red decoration, but have always struggled with getting the wash background right. This actually worked pretty well. Sometimes you find an exemplar (like HMML MS Hs. 3, f. 128a) which looks like it should be simple and straightforward and yet flashy and lovely, but it turns out being just a step or two beyond your ability. Ah well, I would have liked this one to have been brilliant, because it's for a fellow scribe, but in the end it's merely "fine". On the other hand, as crappy as the calligraphy is (even with measuring the exemplar, I still didn't get the line spacing right!!) it is still some of the best Gothic I've ever done, and so I'm pretty pleased by that.

And, you know, it is vellum with gold. And it has abbreviations! So it's not all bad.

To our dear clerk Ellisa von Styra greetings from Vitus and Isabel. By these presents we confirm you as a member of our order of panache with all rights and responsibilities. Done xxviij September a.s. liv and witnessed by us below This is quite possibly the best scroll I have done to date. It's oak gall ink, gold leaf, and gouache on vellum, and basically every single thing about it, I love. Originally I had wanted to do supporters as well, but I quickly realised that my artistic skills would not be up to drawing them, and that I would rather having something simpler done well than something more complex that failed. And you can't even tell that I spilled tea all over part of the border while putting down the gold size!

The design is one of my favorite types of borders, which I last used almost 10 years ago for another Pelican scroll for a dear friend. It's amazing to see how I've improved in a decade.

To all true gentle and noble people these present letters reading hearing or seeing we Vitus and Isabel, king and queen of Drachenwald send due and humble commendations and greetings. Equity wills and reason ordains that women virtuous of noble courage be by their merits renowned and rewarded and one such person especial is our beloved cousin Baroness Mor inghean Bhriain, gentlewoman, lady of the lindquistringes. So that not only in her person in this mortal life so brief and transient but also in her good name and fame to be of noble memory after her departure out of this life and to be in every place of honor ever more reverenced so that by her example other persons may the more sooner desire to apply themselves to dispend their lives in honorable works and virtuous deeds therefore we the said sovereigns have by the power and authority given us by law and custom make the said Mor a member of the ancient and honorable Order of the Pelican and have ordained and assigned unto her the sole and unique right to bear the arms argent a rowan tree issuant from a base gules the tree frcuted and the base charged with three bezants and for augmentation on the middle bezant an ancient crown sable as is depicted more plainly herein these letters patent which we have caused to be drawn up so that we may sign them below in confirmation on the xxj day sept liv.

I did not plan my time very well with this, and spent the last four days before it had to go in the mail working on it for ~3 hours a night. Prior to that, I'd probably done another 3 hours of prep work, so I'm guessing this took around 15 hours in total. Below are a variety of in-progress pictures and close-ups. 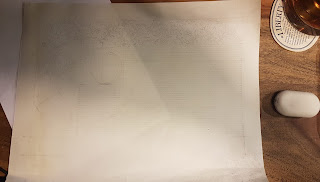 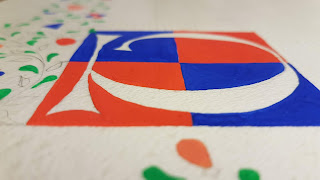 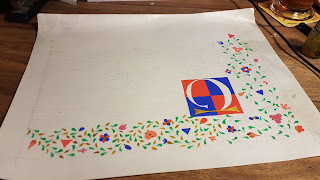 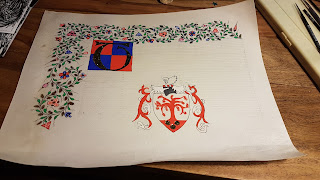 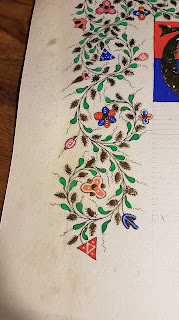 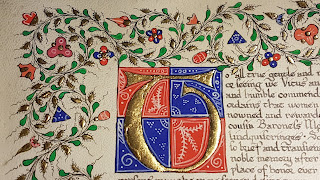 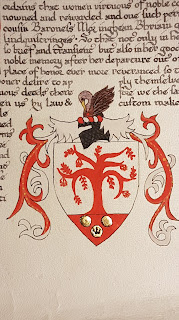 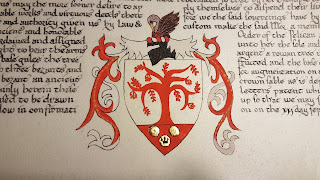